0
No products in the cart.
Menu

(please do not add any other items to your basket if you are an international customer) The price quoted is to ship the book as a large letter only. If you wish to purchase other products, please contact us and we will happily supply you with a complete shipping quote.

Over the past few years, Gordon has been working on several drumming book projects. One of these being “The Recordings Series”. This is a series of books that will accompany CD / DVD Recordings from Gordon and the Boghall band.

As 2019 is his 40th season playing in Grade 1 with the Boghall & Bathgate Caledonia Pipe Band. What better way to celebrate this with the first book in the series to to be released being “FORTE – 2012 The Snare Drumming Settings”

This publication accompanies the Band’s 2012 40th Anniversary Pre-Worlds Live CD recording at the Glasgow Royal Concert Hall (Forte) and includes all the Snare Drum Compositions from the evening.

All the drum scores in the book are set in the same running order as the CD recording. The recording itself, on the KRL – Monarch Label (CDMON 889), is available from various outlets and via Apple I-tunes.

The book is now ready to go to print and we are now in the position to accept pre-orders for it. 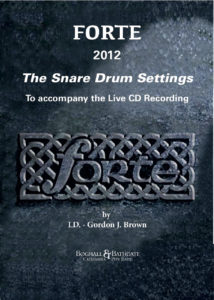