Recorded live at the Glasgow Royal Concert Hall in August 2018 to a sell out audience. This Famous Championship winning pipe band never fails to deliver, Giving their audience an exciting and captivating concert. This is the 3rd Recording from St Laurence O’Toole following on from the previous successes of their debut recording the Dawning of the Day and the 2010 Evolution Concert. It is the first time Pipe Major Alen Tully has lead the band on the Concert Stage having taken over from his father Terry Tully and accompanied by 6 time Grade 1 World Championship winning drum corps lead by Leading Drummer Stephen Creighton.

This is a must have for both Pipe Band, Traditional Music and general music lovers. 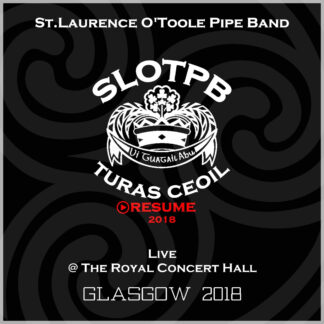